(News and Updates) Summer of Ghosts: Sasappis’ Storytime – A Special Event With The Moth 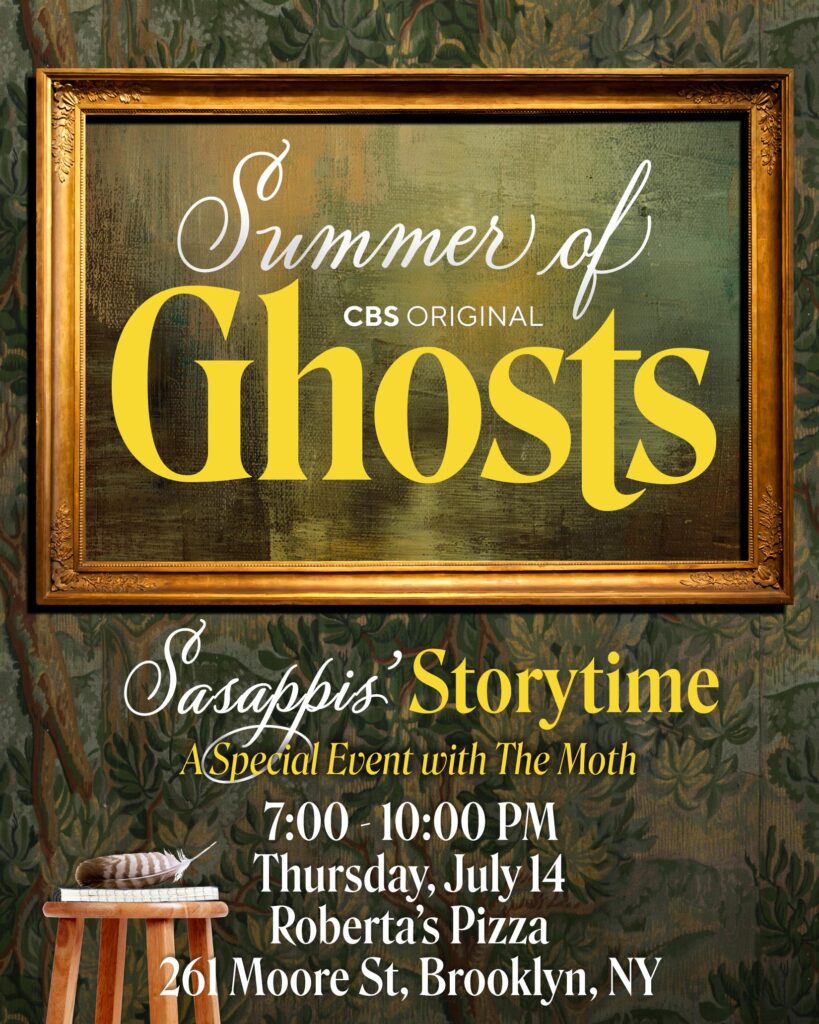 On July 14, ‘Ghosts‘ launches the fourth in-person event dedicated to the characters of the series.

CBS’ GHOSTS and THE MOTH have partnered for a night of delightful stories in honor of Sasappis’ storytelling ways. Fans are invited to attend an evening of well crafted stories told by beloved MOTH storytellers.

Attendees will enjoy a complimentary curated menu of one of the most well-known pizzerias in America, Roberta’s, with an array of pizzas, salads, drinks and GHOSTS branded takeaways celebrating the show’s dearly departed characters.

Andrew McGill is a stand up comic and storyteller born and raised in Brooklyn, NY. You can catch him all over NYC doing stand up and telling stories. When he isn’t making people laugh, he can be found at Hunter College library completing grad school assignments. He also teaches English at a high school in Brooklyn.

Dame Wilburn is a storyteller, Moth Mainstage host, The Moth Podcast host and host of her own podcast, Dame’s Eclectic Brain (6 Episodes). Her storytelling began as a way of keeping cool in the summertime on her grandmother’s porch in Macon, Ga. She has completed two residencies for storytellers: one at Serenbe outside of Atlanta, Georgia, and one with AIR Trez in Almont, Michigan. Dame has also presented storytelling for the University of Iowa and UCLA. She lives in Detroit, Michigan.

Alistair Bane is a citizen of the Eastern Shawnee Nation of Oklahoma and currently resides in Denver, Colorado. Besides being a storyteller he is also a visual artist. He makes dance regalia, quilts, and paints. In 2016 he was a resident artist for the Denver Art Museum’s Native American Arts Program. In his spare time he enjoys rehabilitating feral rez dogs, which is a much more relaxing hobby than it might sound like, as long as you don’t mind a tiny bit of growling.

Mary Blair, Ph.D. is a conservation biologist and the Director for Biodiversity Informatics Research at the Center for Biodiversity and Conservation at the American Museum of Natural History (CBC-AMNH), where she is also the Inaugural Rizavi Innovation in Conservation Fellow. In her work, she seeks to combine knowledge from diverse sources and perspectives to help prevent the extinction of endangered species from threats such as climate change. Mary has more than 15 years of field research experience in Latin America and Asia, and her research has been funded by prestigious awards from NASA and the National Science Foundation. Her blogs The New York Times’ Scientist at Work and AMNH’s From the Field Series have reached a global audience, as have her social media broadcasts for AMNH on endangered species and climate change. In her spare time, she enjoys reading science fiction and fantasy novels, playing softball and march mammal madness (#2022MMM), and evaluating the best playgrounds of Manhattan and the Bronx with her husband and 3-year-old son.

(News and Updates) ‘Ghosts’ renewed for a Season 3 on CBS